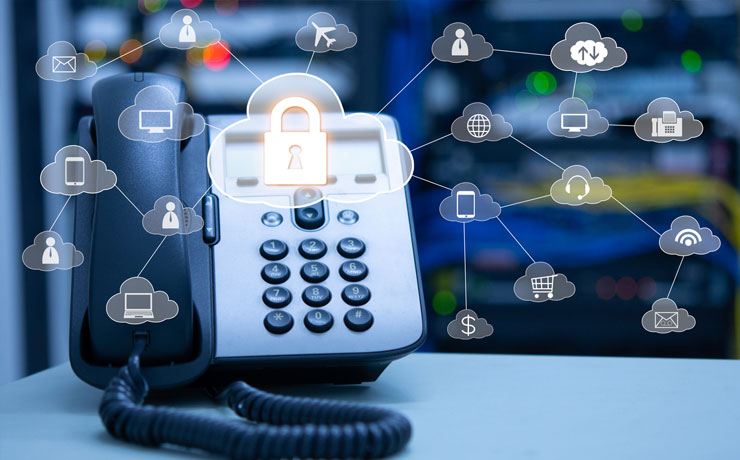 A reliable phone system is integral to any business' operations no matter what your size. Having the right system in place ensures you can effectively manage your calls and communication flow at all hours of the day and night. Whether it's diverting to voicemail, voice to email, setting up conference calls, call accounting, call recording, virtual receptionist, music on hold, mobility or having simple call forwarding features, Al Yamin can customise a solution to meet all your business needs today, and as you grow into the future.
When you choose Al Yamin as your Telecommunication partner, you're taking control of your future and empowering your organization with expert team of telecom services, Contact Center Solutions, Call Center Solutions, Wireless Telephone Systems, Unified Communications, VoIP Security and more.
Al Yamin has been providing professional VoIP Security for businesses in and around Dubai, Sharjah since 2010. We strive to give our clients Enterprise-level services and solutions at prices that work for small businesses. Time and experience has helped us develop best practices and work flow procedures around a proactive philosophy designed to keep your focus on your business, not your technology.

Al Yamin is concerned about security issues related to your VoIP and to make sure your VoIP solution is safe and effective. Security is among the biggest worries for companies thinking about switching to VoIP, it is even a concern for businesses that have already made the switch.
Most of the business house has at times cut back on online activity just because they worry about security and privacy, internet security and web-based telephony systems is a concern from a broad perspective.

Some people worry that:

Calls may be recorded without the user's knowledge.
Call logs can escape into the wild.
VoIP accounts can get hacked, and criminals will run up huge bills that account holders will be forced to pay.
Regulation: Will my VoIP solution be compliant with the latest data protection regulation?.
Service disruptions thanks to a Denial of Service (or DoS) attack.
Concern that the software on VoIP phones will get infected with a virus.
Don’t let security exposures destroy the productivity benefits and economic gain that your company can get from an IP phone system. Security risks can always be mitigated, and professionally installed VoIP networks are highly secure. Al Yamin in UAE is specialized in providing high security measures to your VOIP network. From the security point, we ensure all the connections are secured with the trending mechanisms in the security environment.
Some of them are::
Authorization
Transport layer Security
Encrypting Media Files
Authentication

In the early days of VoIP, there was no big concern about security issues related to its use. People were mostly concerned with its cost, functionality, and reliability. Now that VoIP is gaining wide acceptance and becoming one of the mainstream communication technologies, security has become a major issue. Hence your organization must be alert with the data being flow through the network. We at Al Yamin provides the security in VOIP systems through various encryption technologies and tools.
Most identified threats are:
Identity and Service Theft Eavesdropping is how most hackers steal credentials and other information. Through eavesdropping, a third party can obtain names, password and phone numbers, allowing them to gain control over voicemail, calling plan, call forwarding and billing information. This subsequently leads to service theft.
Viruses and Malware: VoIP utilization involving softphones and software are vulnerable to worms, viruses, and malware, just like any Internet application.
DoS (Denial of Service): A DoS attack is an attack on a network or device denying it of a service or connectivity. It can be done by consuming its bandwidth or overloading the network or the device’s internal resources.
SPIT (Spamming over Internet Telephony): Spamming is actually sending emails to people against their will. Spamming in VoIP is not very common yet, but is starting to be, especially with the emergence of VoIP as an industrial tool.
Call Tampering: Call tampering is an attack which involves tampering a phone call in progress. For example, the attacker can simply spoil the quality of the call by injecting noise packets in the communication stream.
Man-in-the-Middle Attacks: VoIP is particularly vulnerable to man-in-the-middle attacks, in which the attacker intercepts call-signaling SIP message traffic and masquerades as the calling party to the called party, or vice versa.

Don't let security vulnerabilities decimate the financial and productivity benefits that your company can get, or is already getting, from an IP phone system. Whether you use a hosted IP phone service or an onsite VoIP system, protecting the voice network is much like protecting the data network. The security policies and technologies can be complex, depending on your goals (including compliance requirements), users' applications and locations, and the IP phone system you're using, whether onsite or hosted. Fortunately you can strengthen and simplify your company's security by engaging Al Yamin - VoIP experts in UAE.

Take advantage of features on your VoIP system that enable security. Essentially:
Control voice network access by device certificate and/or user name and password.
Restrict the types of calls allowed on the network, by device, user, and other criteria, such as time of day.

Apply physical and logical protection, such as:
Set up a firewall and intrusion prevention system (IPS) to monitor and filter authorized and unauthorized VoIP traffic, and track unusual voice activities, says Krueger.
Lock voice servers physically, and logically for administration. Centralize administration and use domain restrictions and two-factor authentication for administrative access, including to credentials, signalling data, and configuration files.
Regularly install OS updates, and limit software loading on phones.

Use VLANs to Segment Voice Traffic

Apply encryption by segment, device, or user; encrypting indiscriminately can result in excessive network latency or introduce operational overhead and complexity.
Encrypt the signalling at your Internet gateway with Session Initiation Protocol (SIP) over Transport Layer Security (TLS); your service provider's switch fabric may do this.
Encrypt the media (packets) with protocols such as SRTP.
Use VPNs for network connections by remote phones.
For any VoIP Security requirement contact

Al Yamin in UAE is specialized in providing high security measures to your VOIP network. From the security point, we ensure all the connections are secured with the trending mechanisms in the security environment.